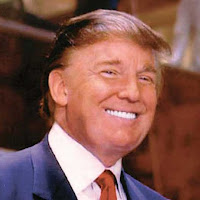 Donald Trump on how to be a better parent? Yes, and in the most unconventional way.
Brad and I have been enjoying Celebrity Apprentice so it was quite intriguing when he talked about running for president. Perplexed by this entertaining businessman and wondering if he could do our nation some good, I checked out one of his books from the local library. Think Like a Champion: An Informal Education in Business and Life is a self-help book on success, geared toward college graduates or persons starting in the business world. I was reading to get a glimpse into his thoughts on life and learn a little more about his philosophies. Little did I know it would revolutionize my parenting. Halfway through one of the chapters (page 65 to be exact), I paused and realized I would never approach parenting the same:
Have the Right Mindset for the Job
"When I think of work, I often see it as problem solving. I've said before that if you don't have problems, then either you're pretending not to see something or you don't run your own business. Problems come with the territory, and they should never surprise you. You should expect them.
Even if you work for someone else, it's a good idea to expect problems and to be ready for them. To me it's a realistic approach. No matter how hard you work, there are times that things happen that are out of our control. Keep your eyes on your ideals as well as reality. That's what being prepared really means."
As I read this, I felt like the final twist of my mommy-Rubik's cube popped into alignment. Expect problems.
Somewhere in the Christian community, we began believing that to follow God and be a good parent meant avoiding problems with your kids. We worked ourselves into thinking that if we just pray hard enough and follow God's plan for parenting, we will sidestep the pitfalls. Walk in the fruit of the Spirit? So will your kids! Pray every day for their salvation? They will surely be saved! Pray every moment for a serene labor & delivery? It must come to pass!! My oh my, how we put such confidence in our abilities and don't prepare for problems. We live in a broken world, people.
I was shocked when my 18-month-old daughter hit the "terrible two's" about six months before scheduled. (Read that story here.) She was strong-willed and stubborn, and I was not ready for the early onset of her roller-coaster emotions and toddler defiance. Four years later, I was shocked again when, after several months of peace and consistency, Zoe hit another imbalance of discontent and malaise. Brad and I wondered where we had gone wrong; had we loosened the reigns of consistency and discipline?
I had not expected problems so I didn't prepare for them. I made so many assumptions and put so much pride in my own abilities (after all, people said we would be great parents!), that I didn't do my homework and prepare for the "next" season of life. And the next and the next. It wasn't until the crisis hit, that I discovered tools that would have prepared me for these times with our kids. I wish I had read this article when Zoë was 12 months old, and not close to six years. It would have shifted my thinking from avoiding the problems to preparing for them.
I'm already looking for great resources on the topic of school-aged kids, sibling rivalries, and raising brothers. I'm thinking about educating my boys and how it will vary from educating my daughter. I'll be checking out all the books on what happens in a marriage after ten years (we're almost at seven!) and not drown in the crisis of a moment. Even with all that help, I won't handle everything perfectly but at least I'll not be surprised when "it" happens.
Don't let your human ideals & expectations, laden with pride, lead you into blindness. Choose to see with eyes of faith - pray for the miracles to break through into your home and relationships - and ask for divine wisdom every step of the way. But prepare yourself - educate yourself - so you're ready when, and not if, the problems happen.
Thanks, Mr. Trump. Your check is in the mail.
Posted by Heather Thompson at 10:54 AM

Great post. I used to wake up every morning, when my first two were little, and think, "today I wont yell, today they will obey, we WILL have a great (i.e. perfect) day". Not consciously of course but I had expectations for myself and the boys that were not realistic. One day Ami Burr shocked me out of that deception and told me to expect sibling rivalry, expect disobedience, etc. I had to expect that they'd be human and I'd be human so I wasnt gravely discouraged or depressed when it happened. It definitely helped me live more realistically! It also reminds us we need Jesus, every day, every stage and not just books or parenting theories - and it gives us opportunities to remind our children that they need Jesus too! :)